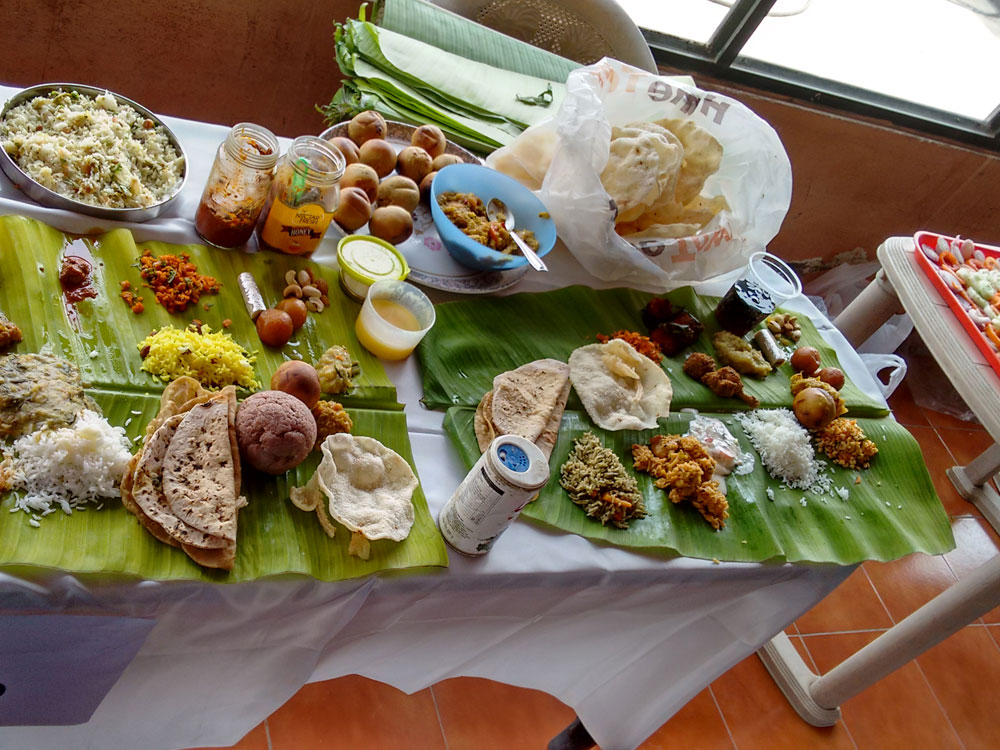 South of India, also known as the Dravid region, comprises of 4 states of Andhra Pradesh, Tamil Nadu, Kerala and Karnataka along with the Union Territory of Puducherry. The southernmost islands of India, Lakshwadeep and the Andaman and Nicobar islands also are parts of South India. South India is a peninsula in the shape of a vast inverted triangle, bounded on the west by the Arabian Sea, on the east by the Bay of Bengal and on the north by the Vindhya and Satpura Mountain ranges.

Normally in India, south Indian cuisine means Idlis, Dosas and Sambhar, and the people from the North of India count all south Indians as one. But contrary to the fact, each of these 4 states along with Puducherry has a distinctly different cuisine. The area being vast, and surrounded by the ocean, the food has lot of variety. The Sambhar, a kind of lentil soup preparation, is used regularly in all the four states, but each state will have its distinct different state of the Sambhar. The Andhra people will make it using lot of chillies, while the Tamilians will have a more sour taste and the consistency will be more dilute. The Keralites will have coconut added to the Sambhar while the Kannadigas will have bit sweet taste to the Sambhar.

Andhra cuisine is supposed to be one of spiciest cuisines of India. The state produces lots of rice and chillies and these two ingredients make the most important part of the cuisine.

Telugu people are vegetarian but with the vast coastal area some of the non vegetarian dishes are equally famous and spicy. The neighbouring states have always influenced the bordering districts or villages, in terms of food and culture. Andhra Pradesh is no exception. But still the pappu (lentils made in to tangy, thick and spicy curry), the pesarattu (green moong dal Dosa, cooked slightly thicker than the normal ones) and the Uppindi (a form of Upma) are common all around Andhra Pradesh.

Andhraites love to eat fried snacks, such as the Bajjis and the bondas. The favourites are the Bajjis (various types of vegetables dipped in chick pea batter and deep fried for crisp consistency), especially Bajjis made of Chillies! Pickles form an integral part of the Andhra cuisine. Andhraites are famous for making the best of the pickles from various vegetables which are spicy and tangy. Yougurt too forms a very important part of the meal. In most households in Andhra Pradesh, no meal is complete with some rice with Yogurt and a gongura pickle or just plain Yogurt.

Kodi (Chicken) Koora and Mutton (Lamb) koora are two popular dishes, often made with range of spices and condiments. The gravy base is usually Onions, Tomato, Coriander, Tamarind and Coconut. These gravies are mixed with steamed rice on the plate during lunch. Also pepper is used for fried meat dishes. Among seafood Tamarind base is widely used. The state's large Shrimp farming makes Shrimp and Prawns widely available. Andhra Restaurant chains and hotels are very popular in other states due to its extensive variety of meat in the menuThe chicken, Mutton and Fish preparations from Andhra are getting takers from North India also. That is because of its fiery and yet tangy taste which any other cuisine cannot match with. The Chicken 65, a famous fried chicken snack, has got a place in many restaurants’ menus in other parts of the country.

The Nizams of Hyderabad, influenced the Hyderabadi cuisine. Actually it is the Mughlai cuisine heavily influenced by the local flavours and preparations. The kormas and the curries have a large influence of Andhra.

Sweets are not largely consumed, other than the festivals and celebrations. The Obattu, Ariselu and the various types of laddoos are preferred at such occasions which are still prepared by the ladies of the house.

Food for the Tamil community is devotion. To serve food is like serving food to the Gods and hence the preparation, cooking and serving all are very delicately processed. Tamil cuisine is a rich cuisine with dishes which have the same procedure of cooking and serving which was a few centuries ago. Staple diet is rice, eaten with various Lentils and condiments, seasoned with curry leaves, mustard seeds and tamarind. The style and the ingredients are more or less the same that of the Andhra cuisine, minus the fiery taste of the chillies.

Sappadu, in Tamil means “meal”. The thali meals, which you can get at most of the restaurants, all over India, are actually the Tamil Sappadu served on big plate. Earlier the meals were served on banana leaves, eaten with clean hands, sitting on the floor which has changed with the times.

Broadly divided in two types of cuisines, the Tamilian cuisine is famous for its complete vegetarian fare from the typical Brahmin kitchen and also famous for the tasty non-vegetarian Chettinad cuisine. The meen Kozhumbu (spicy fish dish) and the chicken chettinad are the two dishes which have gained popularity in with the non-vegetarian food lovers.

Idli, Dosai, Vadda, Utthapam Sambhar and Chutney along with the famous filter coffee, should be the most nutritious and tasty breakfast in the whole of Indian cuisine! Rice and legumes play an important role in Tamil cuisine. Lentils are also consumed extensively, either accompanying rice preparations, or in the form of independent dishes. Vegetables and dairy products are essential accompaniments, and tamarind amchoor is the favoured souring agent. Rice is the chief staple as with the rest of South India , and unlike their northern counterparts, the people of South India regard wheat-based breads of any kind as a poor diet.

Tamilians have some specific stories about the eating habbits. Like they say you should consume very less oil, as oil blocks the sharpness of mind, or a meal should be completed with some curd rice as that will sharpen your brains etc. Nonethless, these food habbits are truly very healthy, with less oil and some curd at the end of the meal to sooth your stomach of the spicy food, are very good eating habbits! In every Brahmin family, one has to have to a banana after the meal to complete the meal.

Mostly post meals the Tamilians have a Paan, a beetle leaf filled with some beetle nuts and aniseed with lime & Catechu added to it. All these ingredients have some medicinal properties like they are supposed to be digestive and also used for deworming.

Previous: Cuisines of East India Up Coming Next: Cuisines of South India
Travelling in India is essentially about this fulfilling freedom. And we at Prakriti Inbound celebrate this face of travel. Explore India with Prakriti Inbound - a travel agency that understands India, and your urge to discover. Explore India Travel Packages or contact us for creating your unique India travel experience
View all our India Tour Packages
Arrange a call Back