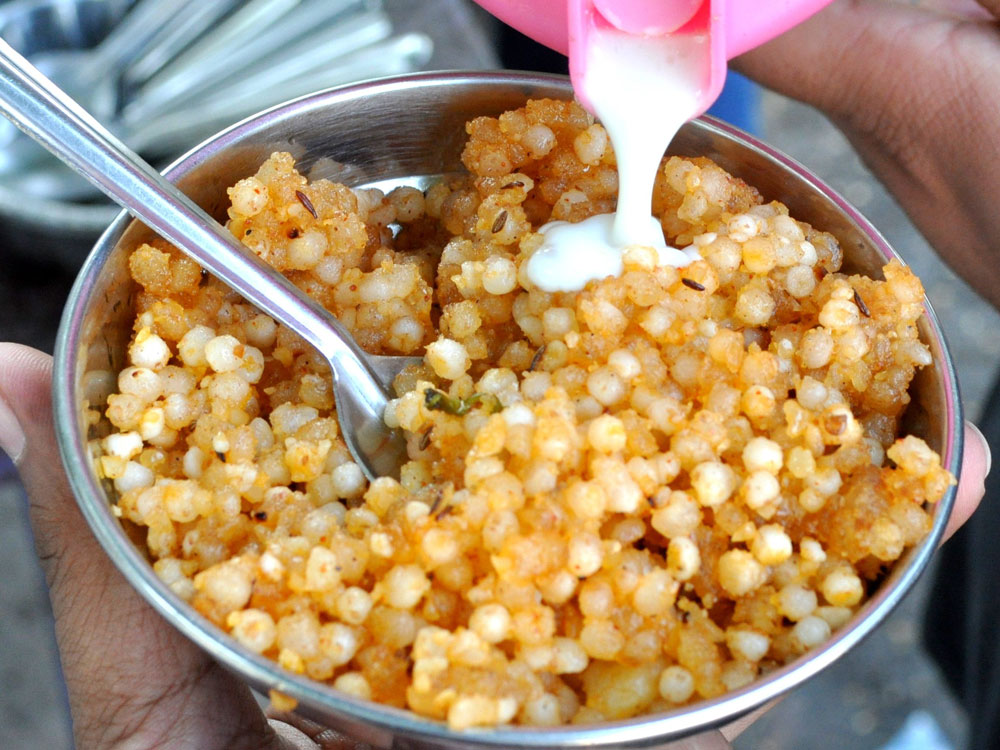 For the people from Maharashtra, food is the one of the most essential part to keep you alive. “Anna he Poornabrahma”, this is what they believe in. Any special food, cooked or bought like sweet meats or even the first Mango of the season, is first offered to God and then savoured. Swayampakghar means the kitchen, and here food is considered to be pious and eaten with care. An aesthetic presentation of meal is very important, and on special occasions like weddings, birthdays or festivals a decoration around the plate is very necessary. A regular meal consists of many accompaniments and has to be served on the plate in a particular order; serving food is an art and eating it properly and cleanly, matters a lot.  The Marathis take pride in their food calling it Satvik, nutritious and filled with all the tastes. Each meal has to have bitter, sour, sweet and spicy / salty tastes. Various kinds of pickles, dry chutneys, and various papads are prepared during summers for the whole year and are eaten regularly.

Staple diet of the Marathis is Rice, Jowar, Bajra, wheat and lentils. Roti, called as poli, or Bhakris are preferred along with rice. All the Marathis have rice and roti for both the meals, daily. Koshimbir, made with finely cut vegetables, tempered with peanut powder and some curds, along with some spicy pickle is a must in every meal apart from vegetables and dal preparations. Vegetarian as well as non-vegetarian food is eaten all over Maharashtra, with strict religious and traditional norms getting followed.

The Malvani cuisine is the coastal cuisine of Maharashtra. Malvan is a small town in the Konkan area and although it has an independent cuisine, it overlaps the Maharashtrian and the Goan cuisine. Mainly seafood with liberal use of coconut in its various forms with some special ground spices, is the main core of Malvani food. Malvani food has its distinct and unique taste. Some of the popular dishes from the Malvani cuisine are the Mori Masala (shark curry), bombil fry and the Solkadhi. Fishes like Shark, Bombay duck, Pomfret and Mackerel are the preferred. Crabs, prawns, shrimps, shell fish also are preferred over chicken and mutton in this area.

Compared to the Malvani Cuisine, food from Pune is light and food from Marathwada and Vidarbha is much spicy. Places like Kolhapur, Aurangabad and Nagpur use red chilies and chilly powder along with powdered peanuts to spice the food. The meat preparations from Kolhapur are famous for their fiery taste! The Pandhara Rassa from Kolhapur and the Saoji rassa from the Vidarbha area are supposed to be the most famous meat preparations in Maharashtra.

It is said that a house is not Marathi, if they do not prepare and eat the Puran Poli, at least once a year! Puran poli is the stuffed roti delicacy made and eaten all over Maharashtra and is liked by one and all. Marathis have a sweet tooth and like to home cook their sweet meats. Shrikhand, basundi, karanji, Shankarpale, chirote, Sakharbhaat, are some of the famous delicacies and regularly cooked and eaten in Maharashtra.

Mumbai is the capital of Maharashtra and people from all over the country come here to fulfill their dreams and earn living. Due to a large number of labour classes, the city developed a food culture of its own. Snacks which are filling but cheaper on the pocket have been developed. The famous Vada pao, Pao Bhaji, Misal, Kothimbir Wadi and many other such snacks were developed. Street Food of Mumbai like the bhelpuri and the Pani puri can be found at every nook and corner.

Fasting in Maharashtra is quite common but actually fasting becomes feasting! There are various dishes cooked with care from Sago and few other vegetables do make an elaborate meal! The Sabudana Khichadi is the most famous and liked by all in India today.

There have been many cultural mixtures in Maharashtra like some influence has come from Gujarat and some from Madhya Pradesh and other from Karnataka. Maharashtra has influenced other states equally with their food. The Christians and the Parsis also have a huge impact on the food cultures of Maharashtra, which we shall see later.

Despite having an extensive coastline for seafood, due to the strong influence of Jain vegetarianism and traditional Hinduism, Gujarati cuisine is mainly a vegetarian cuisine. Fond of having snacks, the Gujaratis have a huge variety of snacks, mostly made from chick pea flour, like the Khandvi and Dhokla, which are the most famous and now can be acquired all around India.

Wheat, Millet and rice make the staple diet of the Gujaratis. Khichdi with Kadhi and pickles is preferred for the daily meal. Bajra no rotlo, which is roti made with millet flour with Shak (vegetables) is equally liked. Staples of Gujarati cuisine include salad, homemade pickles, Khichdi (rice and lentil or rice and mung daal cooked together), and chhaas (buttermilk). Main Gujarati dishes are based on steamed vegetables and dals that are added to a vaghaar, which is a mixture of spices sautéed in hot oil that is added to enhance the digestive qualities and taste of the main ingredient.

Gujarat can be broadly divided into two regions, north and south and the food varies depending on the availability of fresh vegetables and the climate of the place. Some of the well-known Gujarati delicacies are Paunk (combination of various roasted cereals), undhyoo (a speciality of potatoes, sweet potatoes, brinjals and broad beans baked in an earthenware pot in a mud oven), kadi (a curry of yogurt and chopped vegetables), khaman dhokla (a salty, sweet-and-sour cake made from chickpea flour), shrikhand (a dessert made from yoghurt spiced with saffron, nuts, cardamom and dry fruit) and doodh pak (a dessert of thick sweetened milk with dry fruit and nuts). However, the use of spices differs in Gujarat. In north Gujarat, red chili powder is used in the households, whereas the households in south Gujarat use green chili or coriander. The Jains of Gujarat do not take garlic and onions, and thus their thali would taste differently than an average Gujarati thali. Most of the Gujaratis prefer cooking with peanut oil.

Gujarati homemade pickles are well known. Pickles like the Chundo made of shredded raw Mango and the pickles made of raw black pepper fruits are the specialties of Gujarat.  The Farsaan, which are also homemade, are some fretters made of chick pea flour are fried to a tangy taste. The famous Undhiyo is combination of many vegetables, come steamed, some fried, some just sautéed, mixed together with some delicious seasonings, is made in Gujarati households during a special occasion or some festivity.

Moreover, the dry Gujarati climate does not sustain the cultivation of rice. So rice is not so important a part of the Gujarati cuisine as it is in rest of the country.

Previous: Cuisines of West India Up Coming Next: Cuisines of West India
Travelling in India is essentially about this fulfilling freedom. And we at Prakriti Inbound celebrate this face of travel. Explore India with Prakriti Inbound - a travel agency that understands India, and your urge to discover. Explore India Travel Packages or contact us for creating your unique India travel experience
View all our India Tour Packages
Arrange a call Back